Women in the Construction Sector

In an interview with EMC, Srey Nich*[1] stated that men are paid higher than females because “they can do a greater variety of tasks… and are more skillful.” She also stated that “men are more absent than women because they go back to their hometowns. Female construction workers are not absent, but the manager may tell her she is no longer needed because there is no work for her.”

The undervaluing of women in the workplace is a global problem that impedes equality and economic empowerment for women. While inequality undermines women’s human rights, it is also a cost to national economies and businesses, who ignore the talent and the human capital that women offer. In recent research, carried out as part of Care International’s three-year project on Labour Rights for Female Construction Workers (funded by the European Union and Austrian Development Cooperation) EMC found that the persistence of sexism as a social and cultural phenomenon leads to outcomes that are inefficient from an economic point of view. The research concluded that preconceived notions about what women can and cannot do prevent employers from increasing the productivity of their workforce. 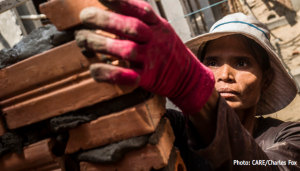 If these stereotypes were broken down, companies could benefit from productivity gains while also ensuring that females achieve their full potential. Female empowerment in the workplace can also benefit men, who are relied upon to carry out most heavy work and therefore suffer extreme exhaustion and health risks.

By providing women with more training opportunities and benefits, construction companies could stimulate productivity gains from their employees, which would benefit the private sector in the long-run. The research found that women are willing to make a long-term commitment to their employers if they were paid on par with men, and 73% said that they would sign a long-term contract with their employers if the company invested in professional training for them.

There is still a long way to go in combatting gender stereotypes, particularly within the construction industry. However, CARE’s work is a vital step to working with companies to help build common ground and break down barriers for women. For more detailed findings and recommendations, view the full report at: http://media.wix.com/ugd/ff000a_7b76539ee8aa4cfe9f3bed735ce7947b.pdf

[1] Name has been changed to protect identity of respondent.