Over the years EMC has done a lot of work to support entrepreneurship development in Mekong Region. These include the Emerging Market Entrepreneur Incubator (EME), Export Market Access Fund (EMAF) and Mekong Women’s Entrepreneurship Challenge (MWEC). 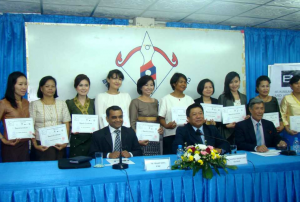 EMC implemented MWEC across 3 countries – Cambodia, Lao and Vietnam. It intends to facilitate the expansion of female-owned business  through a business competition for highly motivated women who own small to medium sized businesses and are eager to expand.

Deputy Director General of the Lao PDR Ministry of Industry and Commerce’s SME Promotion Department, Mr Soutchay Sisouvong, said the project is not only important to supporting female-owned businesses but also to promoting gender equality in society.

“More women are encouraged to be part of the business sector, so the government emphasises the promotion of female entrepreneurs,” he said. The number of female-owned businesses is increasing significantly, especially in the production sector, Mr Soutchay said, but we still need to increase the number of female entrepreneurs throughout the country. “When it comes to quantities, about 2 percent of the population is engaged in female-owned businesses and we still face several challenges when compared to neighbouring countries.” Mr Soutchay said Laos will participate in the Asean Economic Community in 2015, so the requirement for capacity improvement is considerable in order to compete with other countries in the region. “This project highlights the great talent of female entrepreneurs but a wide range of support is needed, especially in finance, business techniques and consultancy to enable them to become stronger in business operations,” he said. Mr Soutchay said he believed these women would play an essential role in contributing to the nation’s socio-economic development.

During the first round of the selection process in Lao PDR, EMC received 133 applications and selected 25 finalists to participate in a threeday workshop on innovation, competitiveness and creativity. From those 25 the 10 winners were selected (pictured).

The programme is sponsored by Information for Development (infoDev), a global grant-giving programme within the World Bank, and funded by the Ministry of Foreign Affairs of Finland.