EMC and Breogan Consulting are currently on the 4th iteration of our Cambodian – Cham language literacy program. This blog is a brief summary of the work and achievements.

The Cham Heritage Expansion (CHE) program  involves the standardization of the written form, production of variety of Cham language training materials and text books, other literature, design and implementation of teacher and student training. The teaching program takes place outside state school hours in parallel to the state school system, and thus is supplementary / complementary program.

CHE is currently in its fourth iteration scheduled to complete approximately end 2017. EMC has been the prime contractor for each iteration since 2012, in partnership with Breogan Consulting (and its progenitors), who are experts in anthropology, linguistics and language education and specialize in Cham language.

Cham script is part of the common heritage of the Khmer and Cham peoples. Traditional script, like Khmer has its origins in the scripts of India. The Cham language has been written since the 4th Century AD in various versions of this Indian script.

Today, the majority of Cham people live in Cambodia. While there are still  communities living in Vietnam, the languages have become different over time and are no longer mutually intelligible. 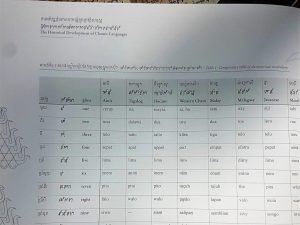 When writing, Cambodian Cham and Vietnamese Cham use different versions of the script.

Throughout this project EMC and Breogan have been grateful for the support of the Royal Government of Cambodia and of the Cham community.

A Cham Heritage Program was originally established with US funding and collected a body of literature and language instruction set inherited from the Cham Kan Imam San community’s preservation of cultural relics from the extinct Kingdom of Champa.

Following this success, the first Cham Heritage Expansion Program accelerated the work of this earlier pilot. CHE I developed an expanded language curriculum and formal eight-month plan of instruction (POI) for literacy. Here’s an article from Cambodia Daily March 2012, on the launch of the program.

A 2nd and 3rd expansion followed, until by completion of CHE III, over 2,000  students had undergone literacy education in the Cham language. 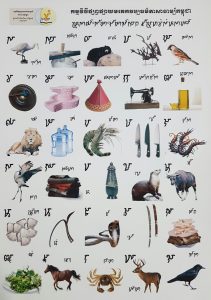 The program developed a program of instruction (POI), covering teacher training, basic and advanced levels of tuition. During CHE III a Script Primer was added, to enable students to practice penmanship.

In addition to literacy, the project has created a series of Cham language media and other sources. These include 3 compendia of folktales and poetry, and 200-page illustrated volume discussing the presence of the Cham language in Cambodia “Rediscovering Cham Heritage in Cambodia: Language Script and Community”. The book is tri-lingual – Cambodian, Cham and English. (Pages from that book are in the banner of this blog post). Also, there is Mukva, a monthly periodical, which brings news, information to the community, in their own language.

The final iteration of the program CHE IV, has establish four additional schools and created a wider range of pedagogic and information materials, to broaden the contexts in which written Cham is used. For example, development of Glossary of Administrative and Legal Terms is underway, that will aid the community in using the their language in civil society organizations. CHE 4 will provide continued support to the Cham Language Advisory Committee, established during CHE 3, and finalize the scientific description of the Cham language and its phonology for dissemination in popular and academic publications.

As the program has developed we’ve seen students of earlier iterations of CHE, emerge as teachers in CHE III and IV.

The Program has been founded on some fundamental principles, which have guided design and implementation throughout. Summarized, this is “to provide a technically sound, culturally accepted, secular education program for the Cambodia Cham Community”.

In practice, this means;

The CHE Program is non-religious. It is open to Cham speakers of any religious affiliation or sect. The CHE books and curriculum are neutral with regards to religion and no particular sect of Islam is promoted.

The CHE curriculum has no political content of any kind and does not endorse any political party, politician or movement.

The CHE Program does not teach language, only literacy. CHE only operates in communities that already speak Cham and would like to learn to read and write their language.

The CHE Program is not a replacement for state schooling or Khmer language education. All CHE students have either already attended or are concurrently attending state schools. Students are expected to already be literate in Khmer before studying the CHE curriculum. Classes are arranged by teachers so that they do not interfere with state school hours. CHE classes have little or no homework, so time is not taken away from state education. 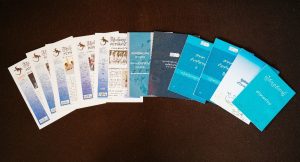