Human trafficking in Lao PDR – who is vulnerable?

After more than 15 years of strong economic growth, the official poverty rate in the Lao PDR has declined significantly. Nevertheless, there remain many districts throughout the country with very high rates of poverty. In addition, many Lao people live just above the poverty line. These people are vulnerable to falling back below it in the event of agricultural or health shocks. This can make them vulnerable to human trafficking. 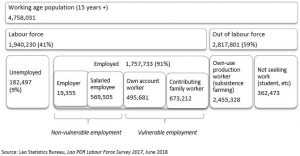 Because of limited opportunities, many Lao people migrate to Thailand for work. Reliable data is scarce, but it appears that there are around 200,000 to 250,000 regular Lao migrants working in Thailand, plus an unknown number of irregular migrants. In 2017 the United Nations Office on Drugs and Crime observed that “estimates of the total number of labour migrants from Lao PDR working in Thailand range between 100,000 and 500,000.”

The main reasons for Lao people migrating to Thailand are the lack of available jobs in the Lao PDR and the prospect of earning higher incomes. Therefore, it is important to understand the degree of “labour underutilization” in the Lao labour market.

Labour underutilization is a measure of excess supply of labour. It consists of:

In total, there are 604,000 persons in the Lao PDR who are underutilized, comprising 182,000 unemployed, 21,000 underemployed and 401,000 of potential labour. This equates to a labour underutilization rate of 26% of the extended labour force. In summary:

So, who is vulnerable to human trafficking?

The above structure of the labour market and the high rates of labour “under-utilization” in rural areas provide some insight as to why human trafficking is such a challenging issue in the Lao PDR. Our research draws on a range of economic, socio-demographic and other factors – such as poverty, literacy and education – and concludes that the areas and types of individual at greatest risk of human trafficking are:

This blog post is based on broader EMC Consulting work conducted for Winrock International in 2019 as part of the USAID-funded Laos Counter Trafficking in Persons Project. EMC Consulting identified gaps in the labour market for those at risk of trafficking and made recommendations on economic opportunities in specific sectors for these people.

Profile and drivers for Migrants from Cambodia