This blog, taken from EMC report “Business Formalization in Lao PDR“ (Sept 2016) considers whether Lao PDR’s strong rates of economic growth are masking some underlying weaknesses in the productivity and profitability of many private sector enterprises, and in particular SME.

The macroeconomic performance of the Lao Peoples’ Democratic Republic (Lao PDR) has been remarkably strong and stable over a sustained period of time. In the decade to 2015, the economy grew by an average of 7.8% per year, with annual growth never dipping below 7.0%. While this strong macroeconomic performance has helped reduce poverty and improve nutrition and health, private sector development (PSD) in the Lao PDR over the past decade presents, by its nature, some challenges to the goal of broad-based, inclusive, and sustainable economic growth.

Private sector growth has been largely concentrated in the resource-based industries of mining (copper and gold) and hydropower. While accounting for just 1% of total employment, mining and hydropower account for about 18% of total value added, one third of total GDP growth, two thirds of merchandise exports, two thirds of foreign direct investment, and 20% of government non-grant revenues (World Bank 2013a and IMF 2013). These industries are dominated by large, mostly foreign-owned companies with weak backward links to small and medium-sized enterprises (SMEs).

In the mining industry, for example, Phu Bia Mining’s copper – gold operation (owned by a company incorporated in Australia) and Lane Xang Minerals Limited’s Sepon gold and copper mine (majority owned by an enterprise from the People’s Republic of China [the PRC]) account for more than 90% of total copper and gold production in the country (World Bank 2013).4 The hydropower sector is dominated by investors from the PRC and Japan.

As highlighted in Figure 3.1, over the past decade, there has been a dramatic shift in the structure of the Lao PDR economy, measured by each sector’s contribution to total value added. Mining and hydropower have grown in relative importance, while the share of agriculture has declined. Over the same period, however, the shift in the structure of employment has been more modest.

Beyond mining and hydropower, the Lao PDR’s private sector consists mostly of smallholder agriculture and micro and small enterprises in manufacturing, construction, and services. Many of these smaller enterprises operate in the informal economy and few of them grow into larger, formalized enterprises of the kind that would help the country diversify its economic base and ensure that the benefits of economic growth are spread more evenly across the population. 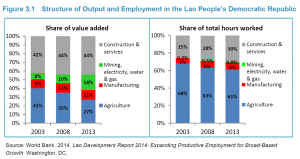 Structure of Output and Employment in Lao PDR

With economic growth concentrated in capital-intensive resource sectors, its flow-on effects on employment, consumption and equality have been somewhat limited. While GDP more than doubled in the decade to 2013, employment rose by just 20%. Consequently, growth in annual consumption per capita averaged 2% over the same period despite growth in GDP per capita rising by 6% on average. Moreover, this modest growth in consumption was not evenly distributed, with consumption by the richest 40% of households growing nearly twice as fast as consumption by the poorest 40% of households (World Bank 2016a). These figures highlight that the nature of economic growth in the Lao PDR presents some challenges to the goal of achieving broad-based, inclusive, and sustainable economic growth.

Nevertheless, it is important to recognize that strong economic growth has had a significant impact on overall poverty levels. The proportion of the population living below the national poverty line fell from 33.5% in 2002-2003 to 23.2% in 2012-2013 (World Bank 2014c).

Several enterprise-level surveys indicate that firms are not reaping the rewards of strong economic growth. According to the World Bank’s latest Lao PDR Enterprise Survey (World Bank 2016b), real annual sales growth and annual labor productivity growth declined by 22.4% and 22.0%, respectively. Annual employment growth also experienced a decline of 0.5%. Experiences were similar among firms in different sectors (manufacturing and services) and of different sizes (small, medium and large).

It should be noted that the World Bank’s Lao PDR Enterprise Survey only includes registered firms with at least five employees, and 59% of the surveyed firms have at least 20 employees. In contrast, the GIZ enterprise surveys include registered firms of all sizes (including those with 1 to 4 employees), and 85% of the surveyed firms have fewer than 20 employees. Consequently, results from the GIZ surveys arguably reflect the situation for SMEs more closely than results from the World Bank surveys.

In conclusion, it appears that the country’s strong rates of economic growth are masking some underlying weaknesses in the productivity and profitability of many private sector enterprises. This finding is consistent with the views expressed by many of the private sector owners and managers interviewed as part of this study; they felt that the business enabling environment need much improvement.

In a subsequent post, we’ll look at the constraints faced by small and growing businesses – business registration, taxation, access to finance and skills shortages.